Termites appeared several million years ago. In France, it is the underground termites that cause the most damage when they search for food (cellulose). They can then pass through very narrow gaps. They have a life expectancy of about 4 years except the queen whose age can exceed 20 years.

Description
Termites can measure up to 30 mm in length. They have compound eyes, two pairs of transparent wings, mouthparts that can chew and lick, a thorax divided into three segments, the first of which extends into a small lobe which covers the base of the front wings, and an abdomen that narrows at its base. They develop by PUPATE ???? metamorphosing from eggs to nymphs before adulthood. The social system of a termite colony is complex.

Family :
There are seven major termite families in the world and more than 1,200 species, of which more than a third are found in Africa. Termites proliferate in hot countries. Some species build big nests, called termite mounds, out of soil, saliva and dung. They are a scourge to built-up areas, destroying cellulose matter, timber, buildings, and more.
In France’s overseas territories, termites are more varied, which is apparent in the different ways in which they infest buildings.
Cryptotermes are dry-wood termites, which damage construction timber. They are found in Guadeloupe, Martinique, the Reunion and French Guiana.
Heterotermes are small-sized termites that form large colonies. Found in Guadeloupe, Martinique and French Guiana, they consume construction timber, paper, cardboard, and more.
Copotermes are subterranean termites, which also appear above ground. They destroy trees and crops and are found in French Guiana and the Reunion.
Nasutitermes are mainly tree-dwelling termites found in Martinique, Guadeloupe and French Guiana. They build spherical nests, the diameters of which measure between 25 cm and 1 m, depending on the species.

Europe is home to two types of termite, Kaolterms, a dry-wood genus in the Kalotermiditae family, and Reticuliterme, a subterranean genus in the Rhinotermitidae family.

Termites are social insects. They live in colonies numbering tens of thousands up to millions of individual insects. In Europe, their nests, composed of underground chambers, and rarely detected. A network of passage-ways swarm with a constant to-ing and fro-ing as termites sometimes travel up to several hundred metres from the centre of the colony to fetch their food. When they come up against a hard surface, they circumvent it by building more passage-ways. 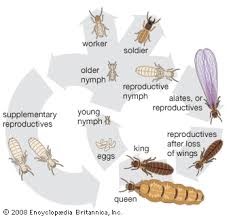 Their behaviour is governed by numerous modes of communication, including, signing, odour and vibrations. Pheromones play a preponderant role in a colony’s structure. Termites can be distinguished by their crushing mandibles and their abdomen which is connected to their thorax. They transfer their food among members of a community, a process called trophallaxis. Termite colonies have several specialised castes, each of which looks and behaves differently from the others.

Measuring between 0.5 à 0.8 mm, a termite egg looks like a tiny bean when it is laid. The egg continues to grow to around 1 mm before hatching. Normally, the eggs are stacked in a little pile where they hatch after 3 to 4 weeks. The young termites are then fed with saliva during their successive moults.

Measuring between 1 to 3 mm, the translucent white nymphs each has a gender but cannot be differentiated. As they go through successive moults, they develop into one of three categories: soldiers (2 to 5%), workers (80%) and alates (15 to 18%). The nymph category develops into the one for reproduction.

Whitish, wingless, sterile and measuring 8 mm on average, the soldiers have a highly powerful brownish head with two prominent mandibles. Nasitutermes also have a muzzle. Their role is to protect the colony and defend the termite nest from attack, particularly from their arch enemies – ants. Their mandibles are so highly developed that they are unable to feed themselves.

Blind, sterile, wingless and measuring between 4 to 6 mm, the whitish workers make up the vast majority of the termite population. They are the ones that cause damage. Using their sharp mandibles, they cut, scrape, tear and chew their food. They dig passage-ways and build tunnels. They are also in charge of the construction and upkeep of the nest and passage-ways, the care of the eggs and young, the harvest of food and the distribution of food via transferral to the rest of the colony (trophallaxis).

Alates are perfect insects, called primary breeders. Measuring 11 mm, including their 4 identical wings which far outstretch their bodies, alates have eyes and are protected from the sun by their black colouring. Divided equally into males and females, the alate caste is the only one attracted by the sun during their annual swarming.

The King and queen are the sole primary breeding couple in the colony. If one dies or the colony needs to expand quickly, they can be replaced by male and female “neotenics”, which are nymphs capable of rapidly developing their sexual glands while remaining nymphs. First they lose their wings. The females then develop oversized abdomens, which almost immobilise them. They are capable of laying 2,000 eggs per day.

Swarming takes place annually, in spring for subterranean termites and in autumn for dry-wood termites, and lasts for several days. Two colonies of the same species come together. The soldiers protect the alates, which project themselves towards the light as soon as its rays reach the exit of the nest. They only fly for a few dozen meters and are often mistaken for flying ants. After swarming, they shed their wings. A royal couple, if it has survived predators, found a colony together, which will grow slowly and unnoticed. Colonies need to be near water to survive. As demonstrated by the regions of France where termites are found, they prefer warm regions. However, heat can also be provided by central heating in buildings. A high temperature is a key development factor, averaging around 34°C in the royal chamber.

Termites are light-fearing insects, which make them difficult to detect. A flying swarm of termites in a house or nearby is a sure indication that there are termites in the area. Otherwise, as neither holes, nor frass appear on the surface of wood, they are difficult to spot. There are, however, a few tale-tale signs: tunnel-like passage-ways in walls, wood and flooring made from a mixture of earth, excrement and saliva; deteriorating skirting-boards and door frames; wings; damp patches; little black dots the size of pin heads on wood and plaster, which are in fact tiny holes that have been re-filled. In order to detect their presence, it is necessary to ask a professional to test the building with electronic noise and movement detectors.

How do they infest buildings?

They infest buildings through the ground and basements. The workers explore the building via the masonry, plaster, insulation, breeze blocks and any dark crack through which they can enter, sheltered from light. Once they come across wood, they eat it from the inside out. Termites move around walls made of plaster, often puncturing them with tiny holes which the plug with earth. When their presence becomes visible, it is proof that they have been at work for several months.